Article 08 - Duration of the Miraculous Age 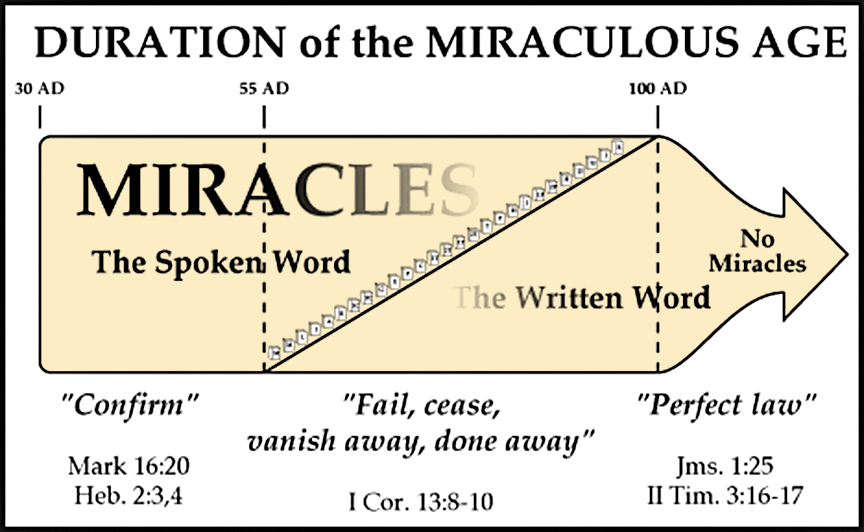 The Miraculous Age And Its Duration

I. Miraculous Measures of the Holy Spirit

A. Christ had the Spirit "without measure" (John 3:34). This denotes that others were given the      Spirit by measure - or in a lesser form.

B. The baptismal measure

3. Some miraculous powers were exclusive to the apostles.


C. The laying on of hands (or secondary) measure

II. The Purpose Of Miracles

B. From 30 A.D. (when the church began) until about 55 A.D. none of the inspired books of          the New Testament had been written. During this time the gospel was proclaimed by the            spoken word and was "confirmed" by accompanying miracles.

D. By the close of the first century, when the New Testament had been completed and                    confirmed, there was no longer a need for miraculous gifts.


III. The End Of The Age Of Miracles

B. What was the "perfect" thing?


1. Some claim that the word "perfect" refers to Christ. However, this cannot be, for       this word is neuter gender and cannot refer to a person. It can only refer to a thing.

The church in it's infancy needed the support of miraculous gifts. However, the time came when it would no longer need them and would lay them aside. In I Cor. 13:11 Paul uses himself as an example of this. He said that in infancy he needed the support of "child-like" things, but when he became full grown he put them away. Likewise, as the church grew into adulthood, it no longer needed the partial gifts and, hence, they ceased.