The Life of Christ: Historically and Geographically
Jon Gary Williams

This is the longest period in the life of Jesus, spanning 30 years. However, it contains the fewest recorded events.

I. His Birth (Bethlehem)


II. Presentation At The Temple (from Bethlehem to Jerusalem and return)


III. Visit Of The Wise Men And Flight Into Egypt (from Bethlehem to Egypt)


IV. Settlement In Nazareth (from Egypt to Nazareth)


A. After Herod's death Jesus was taken to Nazareth where he spent his childhood. (Matt. 2:19-23)


V. Visit To The Temple (from Nazareth to Jerusalem and return)


A. At age twelve, this is the only recorded event of Jesus' boyhood.

B. Having discovered he was missing, Joseph and Mary found him in the temple discussing with the doctors of the law. (Lk. 2:40-50)

D. The next 18 years pass in silence.

This period covers approximately 15 months, from Jesus' baptism to his healing of the nobleman's son in Cana, and is made up of 5 journeys.

I. Baptism (from Nazareth to Bethabara)


II. Temptation (from Bethabara to the wilderness and return)


A. After his baptism Jesus was led by the Spirit into the wilderness where he fasted and overcame Satan's temptations. (Matt. 4:1-11)


III. Marriage Feast At Cana (from Bethabara to Cana and Capernaum)

B. He then went to Capernaum with his mother, brothers and disciples. (Jn. 2:12)


A. At the first passover during his ministry Jesus asserted his authority by cleansing the temple. (Jn. 2:13-17)


V. Return To Galilee (from Jerusalem to Sychar and Cana)


A. After John's imprisonment Jesus left Judea and traveled to Galilee. Passing through Samaria, at Sychar he met a woman at Jacob's well. (Jn. 4:1-15)

This period covers about 4 months, from Jesus' rejection at Nazareth to the events following his sermon on the mount, and is made up of 5 journeys.

I. Opening Of Jesus' Ministry (from Cana to Nazareth to Capernaum)


II. Preaching In The Cities Of Galilee (from Capernaum to parts of Galilee)

B. At the Sea of Galilee after the miracle of fishes he called two more apostles. (Lk. 5:1-11)


III. His Work In The Region Of Capernaum (Capernaum and other parts of Galilee)


A. In an unnamed city Jesus healed a leper. As many more were healed his fame continued to spread. He withdrew to the wilderness to pray. (Lk. 5:12-16)


IV. Second Passover (from Capernaum to Jerusalem and return)


A. Jesus went to Jerusalem for the second passover during his ministry. While there he healed a cripple on the sabbath. When the Jews became angry and sought to kill him, he defended his actions. (Jn. 5:1-47)

B. On returning to Capernaum he defended his disciples who had plucked grain on the sabbath and asserted his authority as "Lord of the sabbath." (Lk. 6:1-5)

C. Later, in the synagogue on a sabbath he healed a man's withered hand. Again he was accused and again he justified himself. (Lk. 6:6-11)


V. Sermon On The Mount (from Capernaum to a mount and return)

This period covers probably ten months, from the healing of the centurion's servant to Jesus' discourse on the "bread of life," and is made up of four journeys.

I. Tour In Southern Galilee (from Capernaum to Nain and return)


II. Gadarene Voyage (from Capernaum to the country of the Gadarenes [probably Gergesa] and
return)

D. In the country of the Gadarenes he healed the man possessed of multiple demons. (Mk. 5:1-13)

E. After returning to Capernaum a woman with an issue of blood was unexpectedly healed as well as the young daughter of Jairus. (Mk. 5:21-42)


III. Tour In Central Galilee (from Capernaum to Nazareth and return)


A. Jesus was again rejected at Nazareth. He then traveled to other villages in Galilee. (Mk. 6:1-6)


IV. Retirement To Bethsaida (from Capernaum to Bethsaida and return)

This period covers about six months, from Jesus' discourse on the "bread of life" to his discourse on humility, and is made up of four journeys.

I. Journey To Phoenicia (from Capernaum to the borders of Tyre and Sidon)


A. While in Capernaum Jesus made another defense of his disciples. (Mk. 7:1-23)

B. In the region of Tyre and Sidon Jesus cast a demon out of the daughter of a Syrophenician woman. (Mk. 7:24-30)


II. Journey To Decapolis (from the borders of Tyre and Sidon to Decapolis)


A. Jesus journeyed through Galilee and arrived at Decapolis. (Mk. 7:31)


A. Jesus sailed across the Sea of Galilee to the region of Dalmanutha and was met by Pharisees seeking a sign. (Mk. 8:10-13)

C. Later, in the area of Caesarea Philippi, Jesus told his disciples about the coming of his church. (Matt. 16:13-20)

D. Here, Jesus began to tell his disciples of his coming death and resurrection and what it meant to be his followers. (Matt. 16:21-27)

This period covers approximately three months, from Jesus' great lessons at Capernaum to his arrival in Bethabara and is made up of two journeys.


A. In a city of Samaria where Jesus was rejected, he rebuked James and John for wanting to call down fire from heaven. (Lk. 9:51-56)


D. Near Jerusalem (Bethany) Jesus visited the home of Martha and Mary and taught a lesson on priorities. (Lk. 10:38-42)

B. Here he made preparations for the closing of his earthly ministry.

This period covers five months, from Bethabara to Bethany.

I. Journey To Judea (from Bethabara to Judea)


A. Jesus traveled through cities and villages preaching. (Lk. 13:22)

C. On a sabbath while at the home of a chief Pharisee, Jesus challenged Jewish traditions by healing a man suffering from dropsy. (Lk. 14:1-6)

E. When murmured against for receiving sinners, in response Jesus taught three parables: the lost sheep, the lost coin and the lost son. (Lk. 15:1-32)

F. Jesus taught in parables on wisdom and covetousness and related the story of the rich man and Lazarus. (Lk. 16:1-31)

III. Journey To Ephraim (from Bethany to Ephraim)

B. Jesus went to Ephraim to spend time with some disciples. Jn.11:54 The Jews wondered if he would come to Jerusalem during the Passover. (Jn. 11:55,56)

B . While traveling east of Jordan, Jesus taught on divorce and remarriage. (Matt. 19:1-9)

This period covers only one week, from Jesus' anointing by Mary at Bethany to his crucifixion at
Jerusalem, and is divided into eight parts.

I. Jesus Arrived At Jerusalem (from Bethany to Jerusalem)


II. The Last Supper (from Bethany to Jerusalem)

VI. Jesus Is Delivered To Pilate The chief priests and elders sent Jesus to the governor. (Lk. 23:1-50)

VII. Jesus Is Sent To Herod And Back To Pilate (from Pilate to Herod and return)


A. Pilate learned of Herod's jurisdiction over Jesus. After seeing Jesus, Herod sent him back to Pilate. (Lk. 23:6-11)

VIII. The Crucifixion (from Pilate to Golgotha) 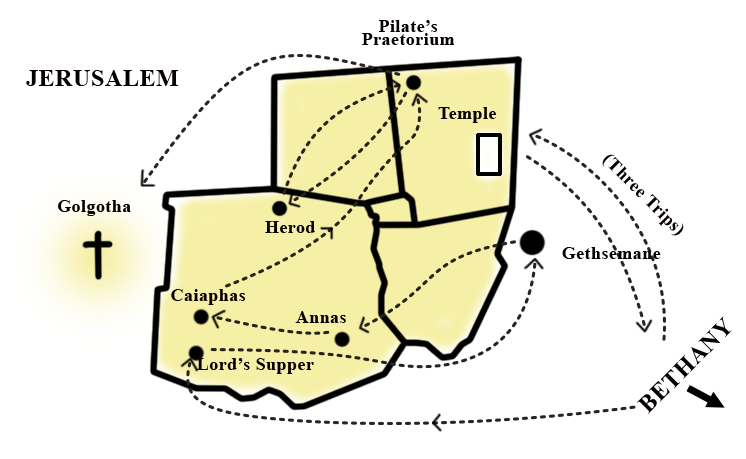