Article 46 - What Happens To The Soul After Death?

What Happens to the Soul After Death?

Another false view accepted by many is that at the point of death, the soul goes directly to either heaven or hell. If this is not true, then where does the soul go? Here is what the scriptures tell us. Compare with the companion reference chart included below.

The soul goes to hades - the realm of the "unseen."

There are two parts to the hadean realm - Paradise and Tartarus


There is a great gulf which cannot be crossed separating Paradise and Tartarus. (Luke 16:26)

At death what happens to all souls?

- Unfaithful Christians and those still lost go to tartarus.


What happens at the judgment?

- The souls will be reunited with new, resurrected bodies.

- All will pass into their eternal state.


Some reason that souls go directly to heaven or hell at the point of death. If this is true, then it follows that souls go there without their resurrected bodies and also that they go there before the judgment occurs.

This brings about an awkward conclusion: that souls would be brought out of heaven and hell to be judged, and then those souls would be reunited with their resurrected bodies and returned to their respective final abodes.

A great judgment will someday take place for all of us, whether we are alive on that day or waiting in the hadean realm. On that day, those bodies in the graves will be reunited with new bodies, and those alive on that day will be given new spiritual bodies - bodies even more real than those we currently have.

This chart shows what the New Testament teaches about the soul and what will happen to it after physical death. It also illustrates the error of many denominational doctrines regarding the afterlife - - teachings such as the Jehovah's Witness doctrine of no immortal soul, the premillennial doctrine of two separate resurrections and the Catholic doctrine of purgatory. 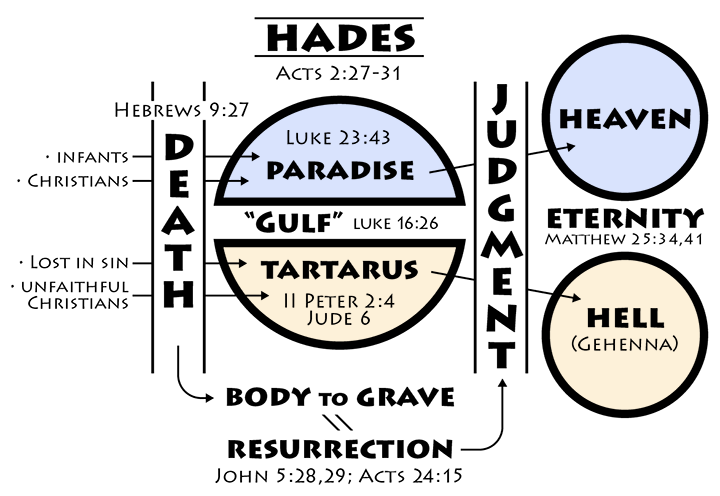