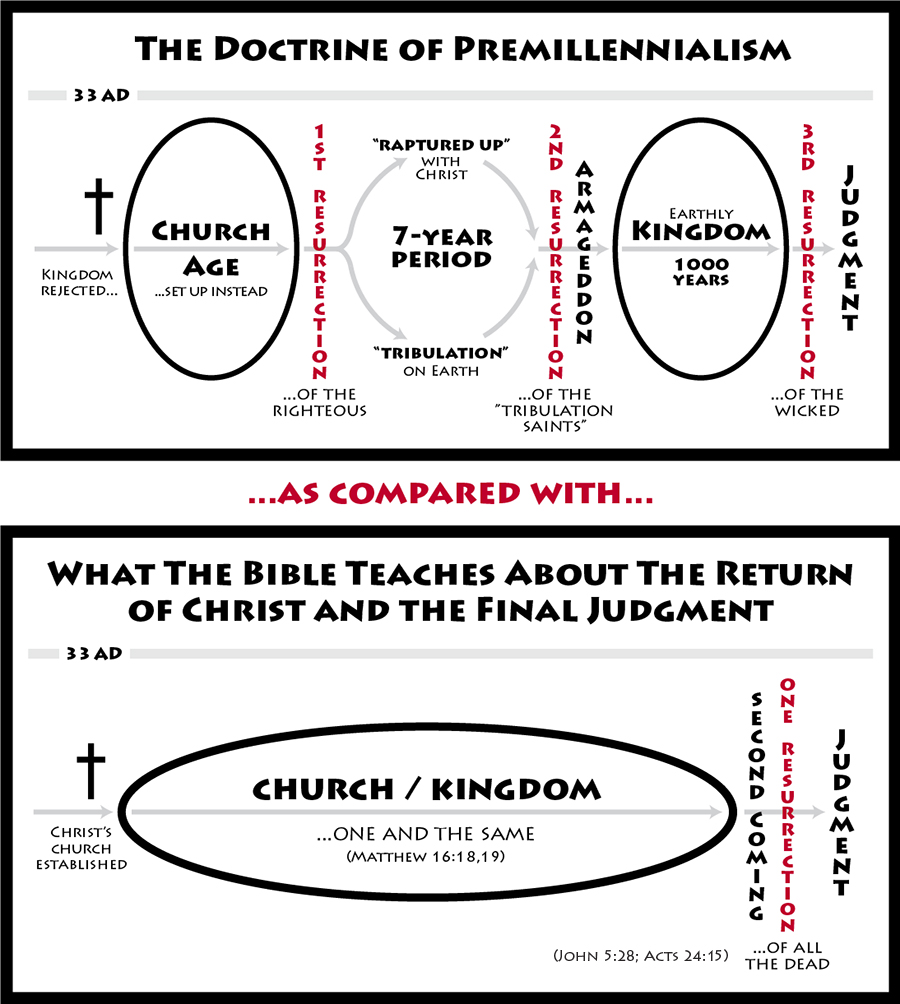 The word Premillennialism comes from "pre" (before) and "millennial" (1000). Some contend that when Christ returns, a 1000-year utopia period will begin, during which He will reign on a literal throne at Jerusalem; hence, Christ's coming, as well as other particular events, will occur "before the millennium."


An Overview of the Doctrine of Premillennialism

Premillennialism has been known to take various forms, with slight discrepancies within the different tenets of the doctrine. But in general terms, the teaching holds to the following premises:

- When Christ came to set up His kingdom, He was rejected by the Jews. Christ then postponed the establishment of the kingdom and established a "church age" instead.

- At the end of this "church age" there will be a first of three resurrections - - that being a resurrection of the "righteous dead."

- This will be followed by the church being "raptured" up for seven years to be with the coming Christ. During this seven-year span there will be a period of great "tribulation" on earth.

- At the end of the seven-year tribulation period, Christ will complete His return. At that time there will be a second resurrection - - this time for the resurrecting of the "tribulation saints."

- Christ will be victorious in this war, and the postponed kingdom will then be set up.

- For 1000 years Christ will reign on a physical throne from the city of Jerusalem. At the end of this 1000-year period there will be a third resurrection, this one reserved specifically for the wicked dead.

- Lastly will come the judgment and the destruction of the heavens and earth.

Various ideas of Premillennialism: Disproved in light of scripture

Below are a few general statements made by those who advocate this doctrine, with scriptures provided which refute these various religious ideas.

"The kingdom, as foretold by Old Testament prophets, was postponed and was replaced by a 'church age.' "

What does the Bible tell us?

"There will occur a seven-year 'tribulation' period."


1. Jesus spoke of a "tribulation" (Matt. 24:29), however, it was to take place before the passing of the generation of people to whom Jesus was speaking. (Matt. 24:34) Also, this "tribulation" involved a "desolation" in which armies would compass Jerusalem. (Matt. 24:1,2; Lk. 21:20) (This obviously refers to the Roman armies surrounding and destroying Jerusalem in 70 A.D.)

2. In the first century a "tribulation" was already being experienced (Rev. 1:9)

"There will be a seven-year 'rapture' period."

This idea is not found in the scriptures. At the second coming of Jesus, those who ascend to meet Him will not be with Him for a seven year period; they will be with Him forever. (I Thess. 4:17)

"There will be three separate resurrections, for three different groups of people."

"A great 'Armageddon battle' battle will occur here on Earth, between Christ and Satan."


1. The word "Armageddon" appears once in the Bible - - in the highly symbolic book of Revelation. (Rev. 16:16) It has nothing to do with an event in the distant future. It is futile to attempt to justify a doctrine solely on the basis of the symbolic language of Revelation.

2. Remember that the time frame for the events mentioned in Revelation were limited to what would "shortly come to pass" and "shortly be done." (Rev. 1:1; 22:6)

"Christ will reign on earth, on a literal throne."

2. The scriptures also teach that Christ would not be a priest on earth. (Heb. 8:4)

3. Since Christ would rule as priest on a throne, yet could not be a priest on earth, He could not rule on an earthly throne.

4. When Jesus returns He will come no closer to this earth than the clouds. (I Thess. 4:17)

"Christ is not yet ruling as king - - this is yet to occur."

"Christ's earthly reign will occur during a 1000-year (millennial) period."


1. Those who teach this view lift it from Revelation 20:1-3, claiming that the "thousand years" must be literal. If this is true, then other parts of this highly symbolic text ("key;" "bottomless pit;" "chain;" "laid hold on") must also be understood literally. However, those defending this view know that these other parts cannot be understood literally. In this, the inconsistency is evident.

2. Nothing at all is revealed in Revelation chapter 20 about:
a) the second coming of Christ,
b) the establishment of a kingdom,
c) an earthly reign of Christ,
d) or any of the teachings of premillennialism.

3. Again, beware of any doctrine that seeks justification by appealing to the highly symbolic language of the book of Revelation.

Some Premillennialists also believe that the earth will last forever.