Origin of the Word "Cross"


Many are aware there are several differing ideas regarding the origin of the cross symbol so often seen in the world of Christendom, and that there is no conclusive support for any of them.

With that in mind, I turned attention to the origin of the word "cross" in the English New Testament, thinking this might give me a lead. However, I discovered that not much specific information on this has been published, which led me into searching through a number of sources including contacting several Greek professors.

I had assumed that somewhere along the way the word "cross" was introduced into one of the earlier English translations. Yet, in going back and looking over a number of them, including the Wycliff and Tyndale, I found that they all contained the word "cross." To my surprise the insertion of this word did not originate with any English translation. When, then, did this word begin to be used?

This is where it gets interesting and informative. It goes back to some of the Greek manuscripts themselves. One professor noted: "The use of the English word 'cross' to translate the Greek word σταύρος is older than the English Bible itself. Not only did the Greek writers intend to describe an implement of death rather than just an 'upright stake,' but in the Greek manuscript tradition this word was sometimes decorated (technically called a 'ligature') in such a way to indicate a unique usage. The ligature made for a natural way to cause the word to not only stand out but actually look like a cross."

The way this was done was to first omit the au from stauros. To show these letters had been omitted, a straight line was placed above the word. This brought the letters t and r together. Then, the r (looking like a p) was superimposed on the t so that there appeared to be a head on the t suggesting a body on a cross. (See example below.) The purpose may have been well intended, but was erroneous. Eventually, the word "cross" was supplied which was carried over into various translations, including the English. 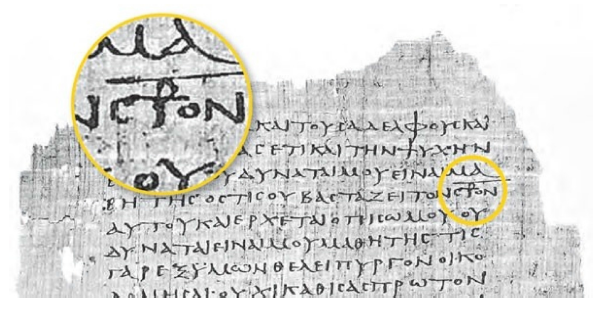