The Flood and the Longevity of Man's Life


For many years those who reject the Bible have sought for things within its pages that might show it to be only a myth. One reference often cited is Genesis chapter 5, which records the extreme ages attributed to men. These critics presume that humans could never have lived to such long ages and following this presumption they claim the Bible to be erroneous. However, a careful examination of the Genesis record explains why the Biblical account is both logical and scientific.

The Biblical record is clear in stating that humans once lived much longer than is common today. From creation to the time of the flood the average age was more than 900 years, with Methuselah being the oldest on record at 969 years.

However, after the the flood the ages of humans sharply declined. For example, Noah's son Shem lived 600 years; his son Arpachshad lived 438 years. Over time man's life span continued to decrease, eventually averaging less than 100 years.

Taking into consideration the time when this drastic change in human life span began to occur, it becomes apparent that the flood had something to do with the notable altering of man's longevity. What, regarding the flood, could there have been which caused such a reduction in the number of years humans were able to live?

To answer to this question, it is necessary to consider the physical conditions which existed in the antediluvian world. From Genesis 1:5,6 we learn that at the beginning there was no rain but rather that the earth was watered by a "mist." Rain is not mentioned until the time of the flood, in Genesis 7:4.

In the time before the flood a substantial, misty canopy must have enveloped the earth. Such a moisture-filled covering would have prevented much of the sun's harmful radiation from penetrating the earth's atmosphere. It is a known fact that radiation negatively affects man's lifespan. Statistical studies have shown that overdoses of radiation lead to premature aging, whereas protection from radiation prolongs man's years.

Additionally, the mist surrounding the earth, being condensed into rain, would have been the source of much of the flood water, with the greater volume of water likely coming from the "fountains of the great deep" - - the earth's subterranean waters (Genesis 7:11).

The following graph illustrates the drastic difference in the longevity of man's life before and after the Genesis flood. 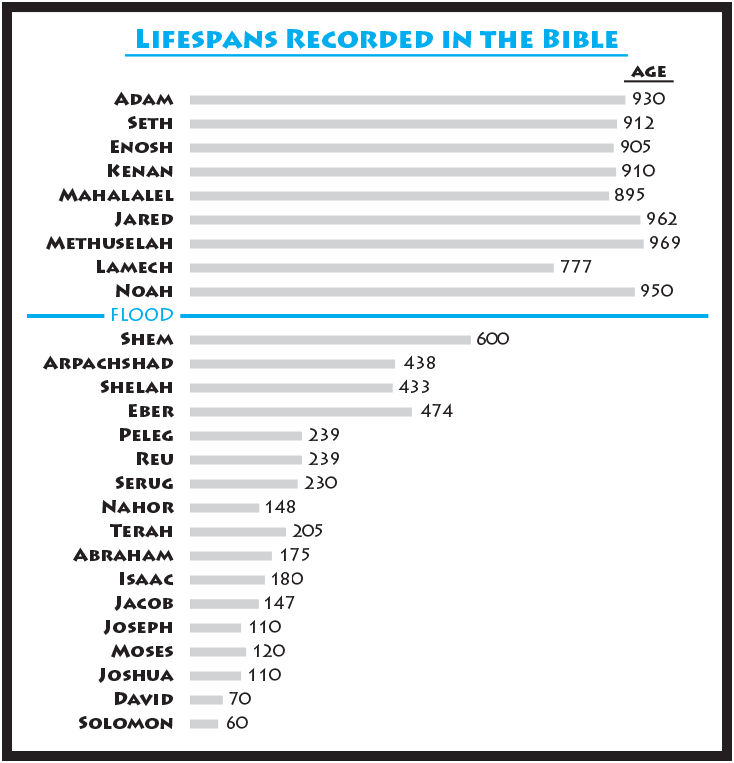