Through the inspired scriptures God has revealed His wonderful plan of salvation. This plan is made up of different parts which, when brought together, establish a flowing unit. They all play an essential role, but any one of them alone is inadequate and could not provide salvation. It is necessary that each part of this plan be seen in the role it plays in the forgiveness of sins. The different parts of this plan are: faith, repentance, confession and baptism. What role do each of these parts play in God's plan?

Faith
Faith, of course, is belief and involves a change of heart - - a change of conviction. It is through hearing the word of God that such saving faith is created (Romans 10:17). When the lost hear the wonderful message of salvation and that Jesus is the One who can be their Savior, faith in Him develops and continues to grow (John 3:16).

Repentance
The word repentance means to "turn," that is, to turn away from sin and turn toward God. It, like faith, involves a change - - a change of will, a change of life. When people are made aware of their lost condition they become remorseful and see the need to make changes in their lives (Acts 17:30).

Baptism
Baptism means to be immersed in water. As with faith and repentance, baptism also involves a change - - a change of state or relationship. In baptism a person is no longer of the world but is now a child of God. It is here that one is made free from sin by the blood of Christ and is added to God's kingdom, the church of Jesus Christ (Acts 2:38, 41, 47; 22:16).

These unique parts of God's salvation plan flow together to bring about a new life in Christ (II Corinthians 5:17). It is a truly masterful design and easily understood. In fact, it is so clear that one must have help to misunderstand it.

But here our attention turns toward an issue we must note. It is sad and unfortunate that in today's religious world many have distorted God's wonderful scheme of redemption. This is done when men seek to attribute salvation to only one part of the plan, specifically to that of faith.

A passage frequently used to promote this teaching is John 3:16 which reads, "For God so loved the world that He gave His only begotten Son, that whoever believes in Him should not perish but have everlasting life."

To demonstrate the error of this reasoning, it need only be pointed out that since this passage does not include either repentance or confession, these also would not be essential to salvation. Indeed, that which proves too much proves nothing at all.

A Figure Of Speech

To properly appreciate the scriptures, and in this instance God's plan of salvation, it is essential to understand that the Bible contains different figures of speech. One of these is called synecdoche, which means that sometimes a portion of the total is used to represent the total. As an example, Luke 1:66 reads, "And the hand of the Lord was with him." The word hand (a part) represents God himself (the total) who would supply all John's needs.

So it is with the different parts of the plan of salvation. As we have seen, in various passages different parts of the plan are found, but never are all four of them found in the same passage. Hence, when a passage speaks of having salvation through faith in Christ, faith stands for the complete plan. The same is true also of passages which attribute salvation only to repentance, confession or baptism.

It is a serious mistake to lift a passage out of context and give it a meaning never intended by the writer. Such is the case with John 3:16. To teach that this verse contains the entire plan of salvation is a flagrant misuse of the scriptures. On any subject it is important to obtain the sum of God's word, not just some of it (Psalms 139:17).

The following chart shows the ten cases of conversion recorded in the book of Acts. It is clearly seen that in none of these conversions are all parts of God's plan of salvation mentioned. Yet, it is understood that all parts played a role in each account. It is also noticeable and of special interest that in every case baptism is mentioned, thus stressing the necessity of baptism. 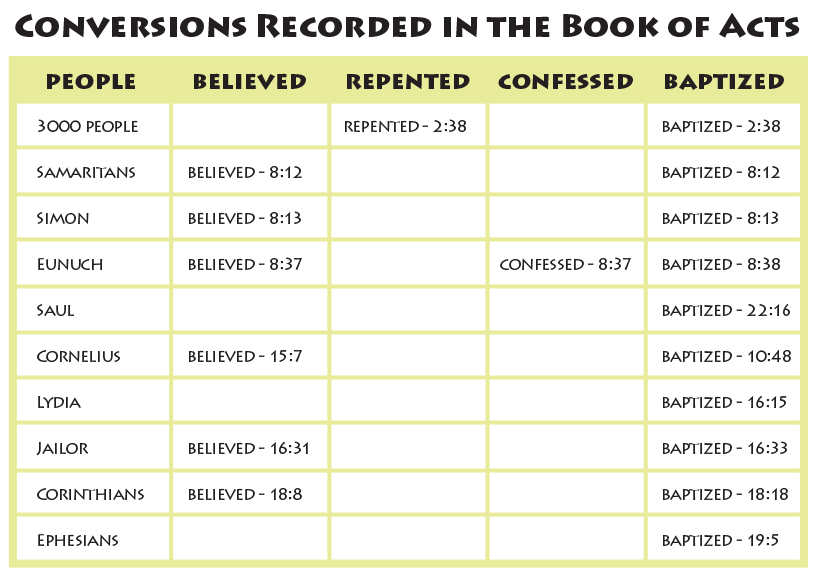